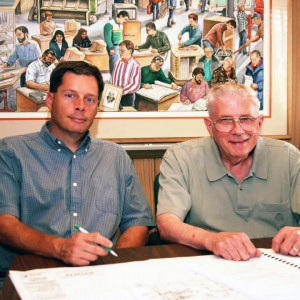 In 1909, our founder, Maurice S. Johnston (M.S.), got started in business on a horse-drawn milk wagon and later worked part-time for several large ice cream companies. Ever the entrepreneur, he began a repair business, tinkering with all sorts of equipment, including some of the earliest automobiles and gasoline flat irons.

In 1932 M.S. applied his knowledge of refrigeration and his mechanical aptitude to his own business, repairing and reselling refrigeration equipment from his basement at 900 Mulberry Avenue. The company moved to its current location in 1942 on the site of what was then a Mennonite farm.

In 1953 M.S. Johnston’s son, Maurice F. Johnston began working as a full time service repairman eventually becoming the second generation President. Michael S. Johnston, P.E. is the current President and is a licensed Professional Engineer in Maryland, Pennsylvania, Virginia, and West Virginia. M.S. Johnston Co. has always been recognized regionally as a leader in its field.

M.S Johnston is actively involved in community service helping non-profits through volunteering or in-kind donations. They have been collecting unwanted bicycles and sewing machines for over 13 years. The bike collection diverts waste from the landfill and ultimately are repurposed for use in third world countries through Bikes for the World.

M.S. Johnston cares about the environment and recycles as much as possible. They also have a 50 KW solar voltaic array on their office/warehouse building.